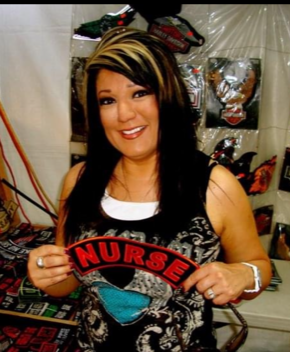 Helena Lucille Holm was born to Frederick Mclain and Nellie Benally on July 18, 1965 in Hoisington, Kansas. She was the youngest of four children.  She spent her younger years with her mother and siblings in Alaska, Arizona and Idaho. She graduated from Blackfoot High School on May 25, 1983.

After graduation, she met Layne Holm. After only a few weeks, they were engaged and married September 7, 1983. Together they welcomed Jenna, Derek and Kristen into their lives. Being in Idaho, the family spent many days camping under the stars, boating in the summer, dirt-biking in the fall and snowmobiling in the winter. Helena was fearless and loved to try anything that the guys were doing. In 2001, Helena started college at Idaho State University. She graduated May 14, 2005 with a Bachelor of Science in nursing. She was so proud to be called a nurse.

In 2006, Helena, Layne and Kristen moved to Las Vegas. Here Helena began to work in the valley and established her name as a nurse. Helena lovingly watched her youngest (Kristen) go to Iraq and serve for a year and then replaced by her middle child (Derek). During this time, Layne and Helena separated & divorced but remained friends until the very end.

Helena than met whom she called the “Love of her Life” (Aaron Davis). They were engaged for a little while when Aaron suddenly passed away in January of 2015. After Aaron’s passing, she spent more time with the family. They held barbecues, celebrations and family dinners.

Helena loved and lived fiercely.  She was an amazing daughter, mother and grandmother. She is survived by her siblings; Ann, Tony and Raymond, her children; Jenna, Derek and Kristen; her grandchildren; Monroe, Mason, Scarlett and Harlee.

Helena’s family and friends will be holding a Celebration of Life on a later date.  It will be held and flowers can be sent to 2548 Claridge Avenue, Henderson, NV  89074.

Share Your Memory of
Helena
Upload Your Memory View All Memories
Be the first to upload a memory!
Share A Memory
Send Flowers