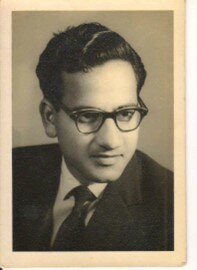 Rajendar Singal enjoyed his life, family, and friends. He was born in the small town of Moga in the state of Punjab in 1939. His father was Dr. Mukand Lal Singal and his mother Mrs. Tara Devi Singal had nine wonderful children and he was the fourth. As a child, he enjoyed playing soccer and table tennis. He did his Master’s degree in chemistry in India and then worked for 3 years in the oil and gas industry in India. In 1966, he took his “moon-shot” and applied to several graduate studies in Canada and got accepted in the PHD program at the University of Windsor. Before he came to Canada, he was introduced to his future wife’s family by a family friend and met his beautiful bride, Promila Singal and they were married on August 19, 1966. A month later, they boarded a flight to Canada with $100 in their pocket. In 1970, they moved from Canada to the United States, settling in the greater Detroit area.

From 1966 to 1985, Rajendar and Promila raised 3 children, Rahul, Viney and Sangeeta primarily in Troy, Michigan. He worked at Kerr Chemical and General Motors as a chemist. The family was socially active with their friends and enjoyed playing sports such as tennis and baseball together. In 1985, the family moved to Las Vegas when he took a new job at the Missile Test Site. They went on to develop many long-term friends within the growing Indian community – many of whom were there for his numerous birthday parties, including his 50th, 75th, and 80th.

Dad and Dada ji (respected grandfather) loved to tell lengthy stories featuring comedic life lessons to his grandchildren. When his grandkids were toddlers, he would call them “Pathur,” which literally translates to “rock” as a representation of “stubbornness.” We all believe he is the fountain of “Pathur” as he liked do things his way and speak his mind.

He will be surrounded by family and friends at his funeral and cremation on Saturday, July 30th and a Celebration of his Life on Sunday, July 31st. He leaves behind his beloved wife of 56 years, 3 children, two daughters in law, Tara and Erika and five grandchildren, Samantha, Sydney, Ashlyn, Sean and Juliana.

Share Your Memory of
Rajendar
Upload Your Memory View All Memories
Be the first to upload a memory!
Share A Memory