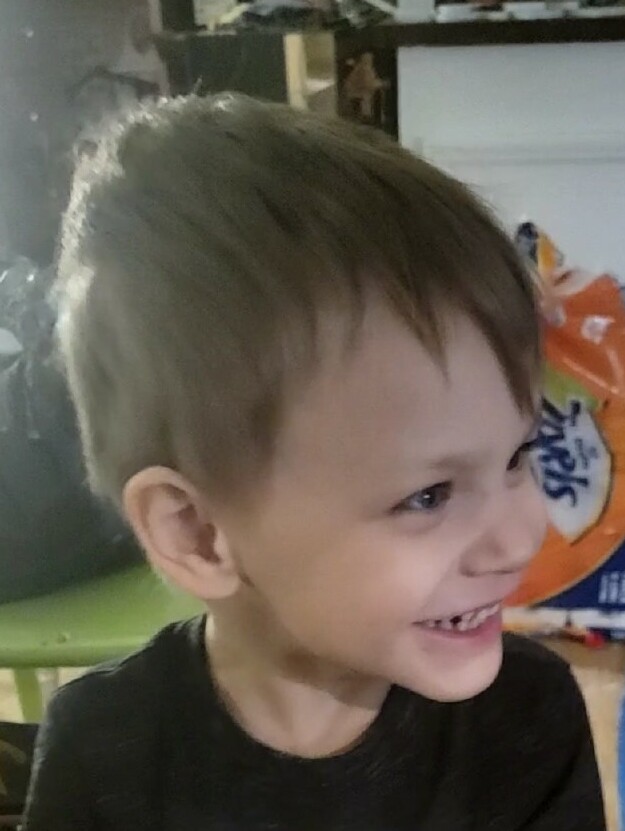 Kaden Louis Meacham of Las Vegas, Nevada, passed away in the hospital on December 7, 2021, after getting caught in an accidental house fire. Kaden was born a happy, healthy, beautiful boy on October 12, 2018, in Las Vegas. Dreaming of one day being a backhoe operator, Kaden loved to make dramatic sound effects when lifting objects or moving his toys. He was brilliant and naturally curious, always talking and asking questions about the world around him. Kaden loved working on projects with his mother, and always promised to keep her safe from any “bad guys.” His eyes would light up when she walked into the room – the two had a special, unspoken, and intuitive bond. He found joy in playing, taking walks, watching television, car rides with his mother, working with his grandpa, adventures with his sissies, his baby bearded dragon, berries, pineapple, Blippi, backhoes, excavators, superheroes, animals, tools, balls, and looking for Blue’s Clues. Kaden is survived by his mother, Rhiannon Leigh Meacham; his sisters, Kayleigh May Meacham and Emma Leigh Meacham; his brother, Elijah Beck; his grandparents, Tammy Tucker Cano, Lawrence Cano III, Jacqueline Beck, and Shannon Lee Meacham; his great-grandmother, Rhonda Meacham; his uncles, Dodo (GoGo) Jared Meacham, Dylan Meacham, Lawrence Cano IIII and Ryan Meacham; his aunt, Veronica Battelle; and his cousins, Jordan Battelle and Jayce Meacham. Kaden will now be reunited with his late father, Brandon Ward Beck, grandfather, Myron Louis Meacham, Auntie Aaliyah Montez. A ceremony for Kaden will be held on January 5, 2022 at 1pm at Central Christian Church, 1001 New Beginnings Dr, Henderson, NV 89011, followed by a graveside at Palm Cemetery on Eastern at 3pm, and a candle lighting at Sunset Park at 5pm. The family welcomes support via donations to their GoFundMe page: https://gofund.me/b5d1f7b4