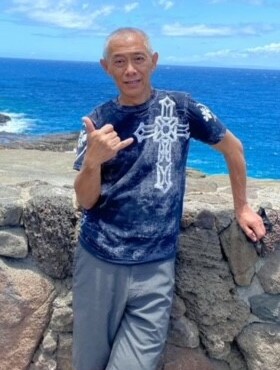 Vicente Delos Santos, age 64, passed away in the early hours of the 11th of December 2021 at Spring Valley Hospital in Las Vegas, Nevada after battling Congestive Heart Failure.

Vicente, or "Bhoy" as everyone calls him, was born on April 14, 1957 in Manila, Philippines. He was surrounded by his large family growing up, he had 9 siblings, of which he was the fourth eldest. He was married to Lilian Bantados in 1977 and they were blessed with three sons. He was later widowed in 2006. He was a very supportive and loving father. He would willingly give them everything eventhough it meant leaving nothing for himself. His sense of humour was infectious to everyone he meets. Bhoy was a wonderful grandfather, he tirelessly contributed in raising his only granddaughter. Cooking deliciously homemade meals for his loved ones was one of his passions in life. His favorite vacation spot was anywhere near the ocean. He will be greatly missed by his family and friends. Everyone that had a pleasure knowing him is saddened to have lost such an individual with such a pure heart.

Vicente is survived by his three sons, Carlo, Joice Christian, and Ariel; daughter-in-law and grand daughter, Mayeth and Sky; his mother, Leonora Franco; his brothers and sisters, Lorna, Victor, Virgilio, Ludivinia, Lilybeth, Lorena and Leslie; his partner Lourdes and her sons, Patrick, Cyril and Lawrence. And many nieces, nephews and cousins.

Family and friends and others whose lives Bhoy touched are invited to the Kraft-Sussman Funeral and Cremation Services, 3975 S Durango Dr., Ste 104 Las Vegas, NV 89147 at 12:00 PM on Tuesday, December 14, 2021, to reminisce, grieve, support each other in this very difficult time. The family welcomes donations to help cover expenses as an expression of sympathy in lieu of flowers. Please have your contribituons made to Carlo and Mayeth Delos Santos, 702-885-5948 at 5203 Misty Morning Dr. Las Vegas NV, 89118.

Thank you and God bless you all. "May you be blessed by God and greeted by angels in heaven.

Share Your Memory of
Vicente
Upload Your Memory View All Memories
Be the first to upload a memory!