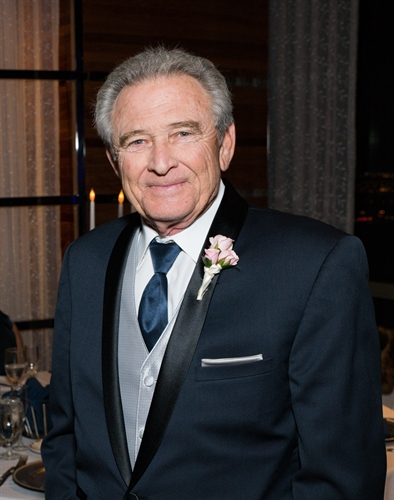 Dean was born in Fort Worth, Texas on June 7th, 1949 to Everett Levoy and LoRene (Dean) George. He grew up in Texas with his brothers, David and Trey (Everett Levoy III), climbing trees, shooting down sunflower stalks with BB guns (sometimes missing and getting each other) and eating watermelon growing in the fields. He played football and baseball, but found his passion in gymnastics, his junior year in high school. In 1967 he helped lead his gymnastics team to State Championship and sang tenor in the State Choir. He attended Odessa College on a gymnastics scholarship and participated in the theatre productions, including Freddy in “My Fair Lady.” After his freshman year, he joined the Navy and served two tours in Vietnam. On leave before his last tour, he met and fell in head over heels in love with Elaine and they were married on October 17, 1970 in Phoenix, Arizona. Dean served 21 years in the Navy, he was a respected leader, and received numerous recognitions, including Sailor of the Year for the COMNAVMARS Pacific Fleet in 1985. His favorite duty station was HEH in Exmouth, Australia. His team still holds the record today for the unloading a supply ship in port in the fastest time. He was president of the community drama club, starring and directing many plays with Elaine. He was lead singer in a popular local band, Traces. In 1996 he and his high school gymnastics team were inducted into the HEB Sports Hall of Fame.  Until his death, he operated his own business, specializing in glass estimation in commercial construction.

Dean was fiercely loyal, generous and forgiving. He believed life is an adventure to be lived, to dance, sing and take risks. He loved music, his Cowboys and his Astros, golf and scary movies. He was a master on the grill and loved the Food network, the shows would always inspire to create something new in the kitchen. Every weekend you would find Krispy Kreme donuts on the counter.  Oh, how he loved a view, the beach and sunsets. Who else could coax a peach tree into prospering in the desert? He completed a back flip every birthday until he turned 50 and his back demanded he stop. He was moved to tears when his granddaughter played the piano and sang, he was so proud of his grandson and so excited to see the man he will become.

He is survived by his loving wife, Elaine (Griffith) his daughters Amy, her husband Todd; Stephanie, her husband Jim and his two grandchildren, Dylan and Kimmi, all from Las Vegas. Also, his brother David George, wife Brenda, from Texas and loving in-laws, nieces and nephews. He is predeceased by his parents and younger brother.

A Memorial Service will be streamed on Saturday, October 23rd at 11:00am, Pacific

He will be interred at the Veteran’s Memorial Cemetery in Boulder City.

“For those who have fought for it, freedom has a taste the protected will never know.”

Share Your Memory of
Stephen
Upload Your Memory View All Memories
Be the first to upload a memory!
Share A Memory
Send Flowers