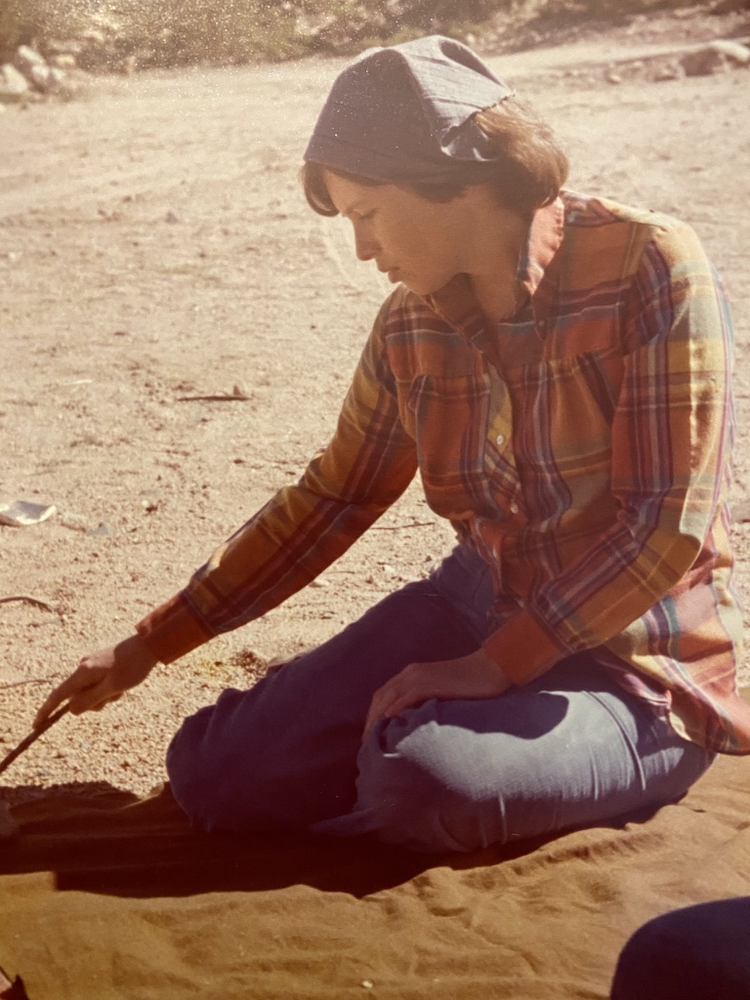 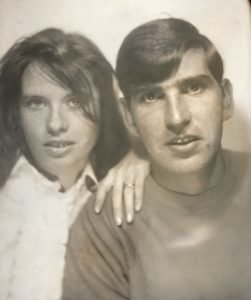 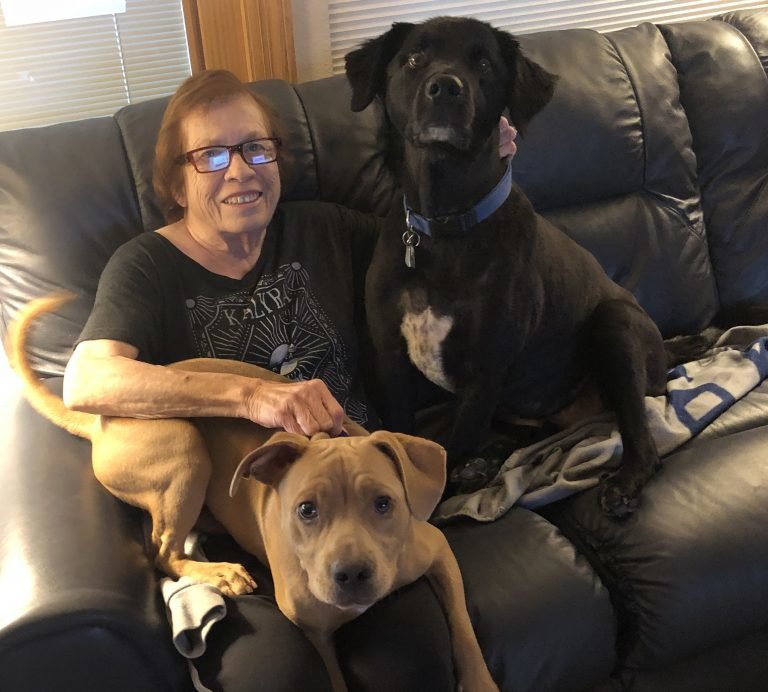 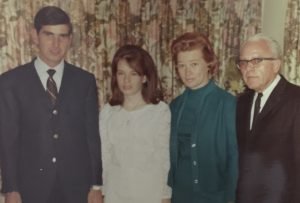 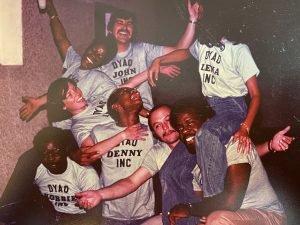 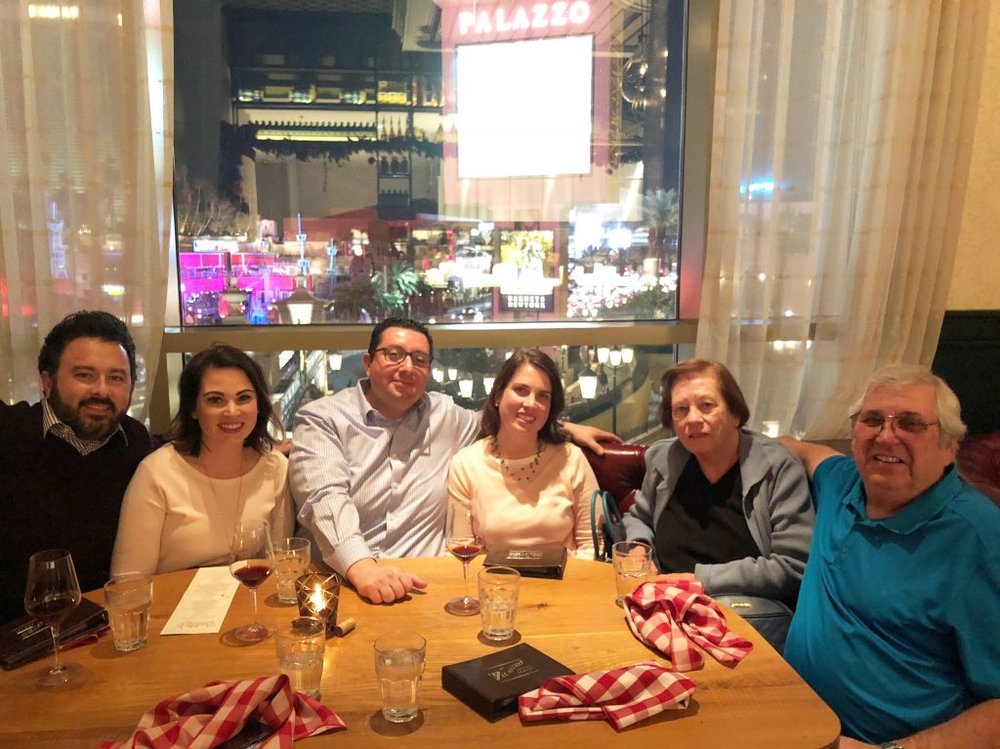 Linda Jean Schmidt, a devoted teacher and nurse, passed away of lung cancer in Las Vegas, NV, on Tuesday, Sept. 29, 2020. Her husband of 52-years, John Francis Schmidt, and daughters Jennifer Ann Arias and Susan Schmidt Gunn were at her side. She was 70 years old. (Shown above with Toby and Midnight.)

Linda valued literacy, supporting her community, and her beloved brood—which included her many dogs! Throughout her life, she lived and worked all over the world, but Las Vegas was her home for over 40 years.

Born July 28, 1950, in Normal, IL, to Velma Belle McMahon, a homemaker, and Noah Donald McMahon, a retired US Army staff sergeant, Linda Jean McMahon was the second of three children. Raised with traditional Christian values, she was stuck between two rough-housing brothers, Larry and Merle, and grew up preferring sweatshirts to skirts.

Since her dad worked on the Air Force’s Minuteman Missile Program, the McMahons moved a lot: Illinois, Texas, Wyoming, Kansas, California, and more. Their home base wound up being Lancaster, CA, with her father working at Edwards Air Force base, which is where the travel bug bit Linda.

Education was extremely important to her. After graduating from Antelope Valley High School, she obtained her bachelor’s in nursing and master’s in teaching at the University of Nevada, Las Vegas. Her desire to help people and inspire the young led her to nursing, as well as teaching, and later as a librarian.

A true love story and lifetime of adventure

Linda met John Schmidt, who was stationed at Edwards Air Force Base, at a dance at the fairgrounds in Lancaster. It was love at first sight for John, and he spent two weeks calling Linda from the barracks to convince her to go on a date with him. From then on, they looked forward to the dances each week.

The couple married in Las Vegas on February 22, 1969, in a small wedding with Linda’s parents and two friends as witnesses. They drove to John’s hometown of Philadelphia, PA, to celebrate their nuptials with his family.

In 1975, Linda traveled with John to Saudi Arabia, where he was working with Project Peace Hawk as an engine mechanic; and she was hired as a nurse. While there, they hosted DYAO (Dance Your Ass Off) parties, a highlight amongst the Ex-Pats. The couple also compiled mix tapes of all the top hits of the time.

When John landed a job with General Electric at Nellis Air Force Base in 1977, they moved to Las Vegas. Back in the US, they traveled to 15 states, most recently traveling on trains all over Colorado.

The Schmidts purchased their first Las Vegas home on Harmony Circle for just $46,000. In 1989, they built a two-story, traditional home on Surtidor Drive, monitoring every step of construction with weekly visits to the site. They have lived in that home ever since.

The Schmidt’s first daughter, Jennifer Ann, came along in 1979, and Susan Genevieve followed in 1985. Both girls were born and raised in Las Vegas. They tried not to hold their mom’s UNLV alumni status against her (Go Pack!).

First of all, when it came to Linda Schmidt, bulldoze any notions about a “woman’s work.” Even before she became a wife and mother, Linda toiled as a butcher’s assistant/meat wrapper, electrician/electrical contractor, parts department assistant at Buffington Cadillac and clerk at the general store on George Air Force Base in Victorville, CA.

In the 80’s, Linda toiled as an RN at Sunrise Hospital and Southern Nevada Memorial Hospital (now UMC), and taught Health Occupation (nursing) at Votech High School (now Southeast Career Technical Academy). An avid reader, she obtained her librarian credential in 1983 and worked as the librarian at Kenny Guinn Middle School. Vitally interested in literacy, she was eager to encourage young people to read.

Linda won the Award of Excellence from Nevada State Board of Education in 1989, and the Excellence in Education Hall of Fame for Nevada Young Readers’ Program in 1997.  Linda retired from the Clark County School District in 2013 after 33 years with the county.

An extrovert, Linda was always quick to laugh and loved joking with her friends and family. Still, “hell hath no fury” could definitely describe her at times. Honest, sometimes to a fault, she was also frugal—a master coupon clipper! She loved perusing the weekly grocery advertisements and scoring a good deal. If the ads didn’t arrive in the mail, she would track the mailman down to make sure he brought them.

Linda loved sitting outside on her patio, a stock of Diet Pepsi a requirement. She liked to have a warm blanket over her lap and wear a sweatshirt or jacket, even when it was 100+ degrees outside. As far as cocktails, her favorite was a “7&7” (Black Velvet Whiskey and Diet 7up) or a sweet wine such as Riesling or White Zinfandel. She was always up for a cocktail and some video poker!

And then there were her beloved dogs, a whole parade of them: Gretchen, Blackie, Clos du Bois, Midnight, and Toby, and her grand-puppies, Merus, Harry Winston, Peggy, and Hudson. Devoted to animal welfare, she regularly donated to local shelters and the NSPCA, Linda was equally giving when it came to homelessness and domestic violence charities, such as the Las Vegas Rescue Mission and Safe Nest.

“Don’t be the blanket”

Although she wasn’t a big fan of Christmas, Linda adored Thanksgiving and celebrating her children’s birthdays. Her fondest hope was that her daughters would have great, happy lives, although she tended to worry when they started dating.

“Don’t be the blanket,” she would caution Jennifer and Susan. The term related to the family pup, Clos du Bois, who had romantic “relations” with his blanket. The phrase became Linda’s favorite when faced with new boys in her daughter’s lives.

Her one annoying habit was latching on to a topic and constantly follow-up. “Did you do that yet?” “What is happening with that?” It drove her family crazy, but they always remembered to take care of whatever it was, big or small.

inda left the laundry and dishes to her John, who happily took care of the household chores and often chauffeured his wife around to her various appointments in her later years.

One thing Linda never forgot was how grateful she was to her husband for his years of housework, dinner preparation, and easy-going attitude. John loved his family and did everything he could to make life easier for his wife. The demands of his job were stressful, and he was often sent out of town for work, so whenever he was home, he was fully present, helping out around the house and playing with his daughters.

She was also supportive of John’s projects, causes, and his career, especially when they were relocating so often. She was equally supportive of her daughter’s dreams and plans, including moving her youngest to Los Angeles after college.

Linda always had a book handy, novels by Janet Evanovich, Nora Roberts, Sue Grafton and Dave Ramsey, and MASH was a favorite TV show. Movies like Steel Magnolias that featured strong, female leads and romantic comedies drew her, as did Lifetime/Hallmark movies.

She had few disappointments, only that she never made it to Hawaii or met Tom Cruise (pre-jumping on Oprah’s couch Tom Cruise). Her most memorable accomplishments were 33 years with CCSD; 52 years of marriage; and raising two smart, loving daughters.

A memorial is planned for 3pm Saturday, October 3rd, at Kraft-Sussman, 3975 S Durango Drive #104, Las Vegas, NV 89147. The service will also be available via Zoom. Please contact Susan Gunn for the details at susan.s.gunn@gmail.com.

In lieu of flowers, the family appreciates donations be made to one of the following charities in Linda’s honor:

Share Your Memory of
Linda
Upload Your Memory View All Memories
Be the first to upload a memory!
Share A Memory
Send Flowers