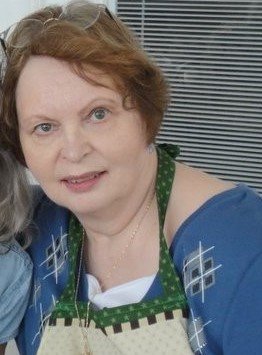 Gloria was born in Chicago, Illinois to parents Walter Oskorep and Josephine Patricia (Gera) Oskorep and was a sister to Jerome Oskorep. She grew up in Chicago, IL, where she graduated from Resurrection Catholic high school in 1962. She worked her entire career in Data Processing as an Operator, Programmer, and Customer Service Representative from the early data processing era in the 1960’s until her retirement in the 1990’s.

Gloria loved to dance (especially Polish Polka), sing, was an accomplished cook at home, did crochet and cross stitch (made over 20 “Merry Kissmas” cross stitch which were framed and given as gifts to family and friends), traveled to many American tourist places with her husband (EG Hawaii, Grand Canyon, New York, Florida, all over Texas, the surrounding states, Las Vegas, and of course, Illinois, especially Chicago). She also visited Toronto, Montreal, and the Niagara Falls in Canada.

Gloria is survived by her husband, Anthony Chevas. They were married from June 15th, 1968 until her death on August 12, 2020. They spent over 52 years together. Gloria is also survived by her two daughters: Therese Chevas and Deborah (Chevas) Wilhelm, married to Kenneth Wilhelm, and their child, Gloria’s grandchild, Alexander Nicholas Wilhelm.