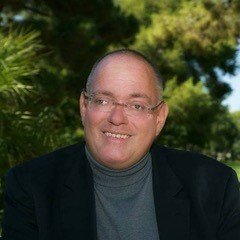 Samuel Lewis Lieberman, age 58, passed away Friday April 3, 2020 in Las Vegas, Nevada. At his core, Sam was a social being who thrived on connection to other people. Sam devoted all of his life and energy to helping others—most notably in Las Vegas where he lived for almost 40 years, and also through his lifelong relationship with the Olin-Sang-Ruby Union Institute (OSRUI, a Reform Jewish summer camp) in Oconomowoc, Wisconsin.

Sam was the oldest child of David and Sara Lieberman, and was born in Minneapolis, Minnesota. He was born with cerebral palsy, which was a significant physical disability, but he never let that get in the way of anything he wanted to do, and he never complained…EVER. Sam grew up on Lake Harriet, along with his siblings Jonathan, Barbara and Michael. As a teenager, he was very active in Jewish youth activities at Temple Israel Youth Group, Camp TEKO and NFTY, and he attended Southwest Junior High. During high school summers, Sam worked at OSRUI, where he ran the summer camp office. Sam graduated from Marshall-University High School in 1980 and then left Minneapolis to attend college at the University of Nevada-Las Vegas (UNLV). At UNLV, Sam immersed himself in all aspects of student life—so much so that it took him 16 years to complete his studies in order to graduate! Through this experience, he developed a passion for ensuring that people of all backgrounds and abilities had access to education.

As an adult, Sam worked with boundless energy as an advocate for several important causes—including as a trusted aide to Senator Harry Reid of Nevada, Chairman of the Nevada Democratic Party, a Board Member of Nevada PEP (an organization devoted to parents of children with disabilities), President of Congregation P’nai Tikvah and member of the Board of Regents of the Nevada System of Higher Education. He was also a kind, warm, funny and loyal friend to so many people of all ages and backgrounds. (He has 4,455 friends on Facebook, and the flood of messages on his Facebook pages is an uplifting thing to read.)

Sam loved to eat too. In Minneapolis, it was prime rib at the King’s Inn, egg rolls at the Nankin and corned beef sandwiches at the Lincoln Del. In Las Vegas, it was shrimp cocktail and a Coke at The Tillerman, and a ribeye steak, twice-baked potato and Caesar salad at the Golden Steer. He also adored chicken soup with kreplach made by his Baba Adele Lieberman—though she only made kreplach on special occasions. He didn’t really drink alcohol, except he would order Bailey’s Irish Cream and coffee—and sip it through a straw.

Sam also had a deep love and fierce devotion to his family—which included not only his parents, siblings, nieces, nephews, aunts, uncles and cousins, but also his devoted friend and caregiver Clifton Whitehurst and Clifton’s daughter Alyssa Whitehurst. Sam is preceded in death by his father David Lieberman, and is survived by his mother Sara, siblings Jonathan, Barbara and Michael, sisters-in-law Lisa Kayne Lieberman and Jessie Washburne-Harris, brother-in-law Sam Askenazi, nieces and nephews Rebecca, Charlotte, Benjamin and Gabriella, uncle Stephen Lieberman, aunts Sheila Lieberman and Sandra Okinow and a large and loving group of cousins.

The world is a better place for his having been here, and he will be greatly missed!

An online memorial service will be held on Tuesday, April 7, 2020 at 10:00 am PDT (Noon CDT / 1:00 pm EDT) led by Sam’s dear friend Rabbi Yocheved Mintz of Congregation P’Nai Tikvah in Las Vegas. The link to the service is https://www.facebook.com/ksfuneralservices/live/.

Contributions in Sam’s memory may be made to the following organizations:

Share Your Memory of
Samuel
Upload Your Memory View All Memories
Be the first to upload a memory!