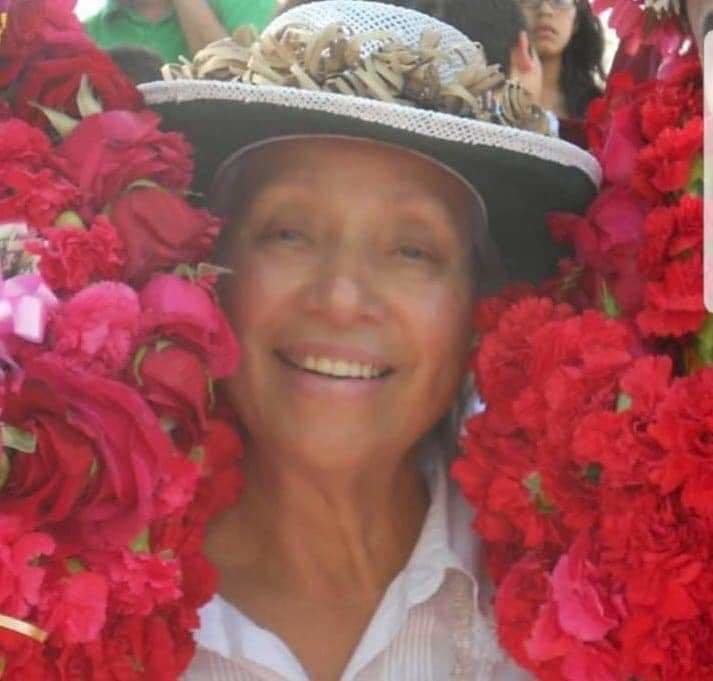 VIKA LATAHEANGA “LATA” WOLFGRAMM TU’UA, born 24 June 1933 in the village of Hunga, Vavau in the Kingdom of Tonga. Lata is the daughter of Charles Ataongo Wolfgramm of Otea, Vavau and Meletoto Puleiku of Va’otu’u, Tongatapu. She passed away peacefully from mortality with family at her side on Saturday, February 16, 2019 at her home in Las Vegas, Nevada.

Growing up as a young girl in Tonga was foundational for Lata. In Tonga, she developed the basis of who she would ultimately become.  She learned the value of persistence and hard work. Lata excelled as a student, receiving high marks and placing first in her class on many occasions. She regularly scored highest in her class, always doing well in arithmetic, embroidery, and home skills.

Lata’s love for her father and her innate desire to please him in every way led her to overcome challenges and develop newfound skills.  Few knew that Lata was born left-handed.  With her father’s support and guidance she was able to teach herself to write with her right hand.

Meletoto, Lata’s mother, passed while she was very young. Lata grew up without the mother-daughter relationship many enjoy.  She developed talents and skills as she learned to stand in for her mother. The absence of a mother in Lata’s life, for her, turned into a lifelong yearning and a search to know her mother, a search that culminated only just a few days ago.

Over her lifetime Lata distinguished herself as a loving mother and homemaker, a teacher, a dancer, an entertainer, a businesswoman, and one who was quick to render service, service to others, and service in her Church.

If Lata was to produce a resume today, it would include the following:  Homemaker to a family of nine children, partner in the Moana Maintenance Company, a janitorial concern whose employees were comprised largely of her children; manager of the Laniloa Lodge Café in Laie, Hawaii, which she attained with her only discernable qualification of having raised a family of nine children; proprietor of Lata’s Bread, a very popular food item among the residents of Laie, Hawaii; initiated and organized a government-subsidy to benefit the aged; and manager of  the Temple View Apartments, the married student housing complex on the campus of BYU-Hawaii.

Lata together with her husband had an abiding faith in the ordinances and principles taught by The Church of Jesus Christ of Latter-day Saints. Her church service included nearly every teaching calling to the youth of the Church; a gospel doctrine teacher, missionary couple to Hamilton, New Zealand to assist in the building of the Church College of New Zealand and the New Zealand Temple; stake and ward Relief Society president; temple worker, notably as an interpreter to Tongan saints visiting the New Zealand Temple.

One of Lata’s greatest traits was to possess a boundless love, especially for her family. She loved deeply, especially those who were dear to her. Later in life this became evident as she cared for and ministered to those who needed her by their side. This was never so evident when she helped take care of her daughter who contracted and later succumbed to cancer, and to her cousins, aunts and uncles.  She was known to drop everything when called upon to care for those who needed her help.

Lata and her family immigrated to New Zealand in the 40s. Lata came into herself as a teenager. She was intelligent, beautiful, popular and the envy of every social circle. Lata loved to dance; she was an able competitor on the dance floor. No matter how well she and her dance partner were, they always found themselves runners-up to a couple that featured a handsome Samoan young man. She became dissatisfied with always taking second place, so she changed partners and danced to first place. That young man was none other than Nelesoni Aiulu Tu’ua, her future husband.

Adored by Nelesoni, they were married on 27 October 1956, at Scotia Place Chapel in Auckland, New Zealand. On March 12, 1960, Vika Lataheanga and Nelesoni Aiulu Tu’ua were sealed for time and eternity in the Temple at Hamilton, New Zealand.

Funeral Services will be held 1:00 PM on Saturday March 2, 2019 at The Church of Jesus Christ of Latter-day Saints located at 3300 North Buffalo Drive, Las Vegas, Nevada 89129.  A public viewing will precede the funeral from 11:30 AM to 12:30 AM.  Graveside Service and Interment at Laie, Hawaii will be at a later date and time.

Share Your Memory of
Vika
Upload Your Memory View All Memories
Be the first to upload a memory!