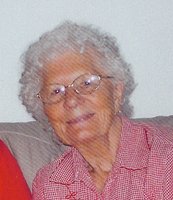 Mary Elizabeth Pease, of Las Vegas, Nevada and St. Augustine, Florida, died on February 9, 2010, at the age of 91. She peacefully passed at the Nathan Adelson Hospice in Las Vegas. Mary was born in Ohio, the first child of Anna and Joseph Chverha. She had one younger brother, Joseph. She lived most of her life in Garfield and Clifton, New Jersey. She also resided at the Columbus Colony of the Deaf in Ohio for five years. Mary attended the Marie Katzenback School for the Deaf where she was an awarded track star. Following school, she married her dearest friend and classmate, Allen Pease in 1943. They had two daughters Jean and Carolyn. Her working years were as a seamstress and assembly line employee. Mary was active as a member of the New Jersey Association of the Deaf and a parishioner of the Most Holy Name of Jesus Church in Passaic, New Jersey. During her residency in Florida, she was a member of the Florida Association of the Deaf. Mary's first love was her family. She created and sewed Halloween costumes for her children and grandchildren. She attended her daughters' school programs and wrote notes to communicate with their teachers. She was a doting grandmother, who cherished family time and holiday dinners. She was there when a family member needed her. Mary always reminded her daughters that family was first and work was second in life. She was most proud of her children's and grandchildren's academic accomplishments and weddings. Mary was the widow of Allen Pease after 52 years of marriage. She is survived by her daughters and son in laws, Jean and Robert Gigante of Las Vegas, and Carolyn and Brett Sendler of St. Augustine. Her grandchildren are Tucker (Jennifer) Ophof, Troy Sendler, and Shawn (Heather) Sendler, Robert (Annie) Gigante Jr., David (Lauren) Gigante and Danielle Gigante. Mary was blessed with ten great grandchildren. There will be a memorial service, &quot;Celebration of Life&quot;, in June, 2010, which will be officiated by her grandson Shawn. This will take place at Mary and Allen's grave site in Clifton, New Jersey. The exact date and time will be forwarded to family and friends. The family asks that those who wish to donate in Mary Pease's memory please do so to: Nathan Adelson Hospice, 3391 North Buffalo, Las Vegas, Nevada 89129. Three words that sum up Mary's life are family, love and perseverance.