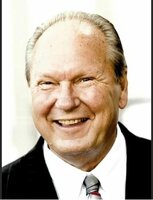 Bennett Clarence Olson III, 74, of Las Vegas, went to be with the Lord on December 20, 2022 after a courageous battle with cancer. BC was born on March 27, 1948 in Minneapolis, MN, the son of Bennett and Helen Ruth Olson. Growing up in Bemidji, MN, he was a Boy Scout, participated in First Lutheran Church services, played basketball, football, and music. BC loved being outdoors to fish and drive fast on the frozen lakes. In 1966, BC graduated from Bemidji High School and then obtained a degree in Criminal Justice from the University of Nebraska Omaha. He followed in his parents’ footsteps by enlisting in the US Army. Ben (as he was then known) graduated from Officer Candidate School in 1969 and was then stationed in MD to attend military intelligence school. After completion, Ben was stationed in Vietnam. Ben loved golfing and being in a fantasy golf league. He was a loyal fan of the Minnesota Vikings, Twins, Lynx, and Wild, as well as the Las Vegas Golden Knights. Ben enjoyed video poker, watching his beloved hummingbirds in his garden, and laughing at inappropriate jokes. Ben had a quick wit and infectious laugh- you knew what he was thinking just by his great facial expressions. He was a Master Mason and avid supporter of the Las Vegas Rescue Mission. Later in life, Ben spoke with and met many of his extended family members. They held a very special place in his heart. Ben will be lovingly remembered by his daughter Jennifer (Tim) Weinkauf; son Shane (Casey) Ocander; granddaughter Kaylee Ocander; sister Phyllis (Paul) Wiesner; nephews Eric (Debbie) Wiesner and Steven (Kelsey) Wiesner; niece Andrea (Lucas) Divine and many family and longtime friends. A Celebration of Life will be held this summer in Bemidji, MN