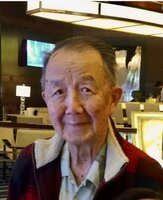 Peter Quan, age 91, of Las Vegas, Nevada, passed away on December 11, 2022. Born in San Francisco, California on June 19, 1931, Peter was of 2nd generation Chinese decent and was one of eight children born from parents Chong Quan and Lai Ho Shee, who migrated from China to start a better life in the United States. He is survived by wife, Gladys, 3 daughters (Nora, Tracy and Jodi), a son (Peter), 5 grandchildren (Heather, Nalani, Brandon, Nicolette, Jazzmyn, Jaykob and Tina) and also 2 great-grandchildren (Benjamin and Ellie). He also is survived by an older sister (Florence) and a younger brother (Jim). Peter was retired when he became a resident of Las Vegas, Nevada. In his prior years, he lived on Oahu, Hawaii where he met his current and 2nd wife, Gladys Tanigawa, at the Chun Hoon Market where they both worked. At the time, Peter was also working full time for Swift as a meat cutter and then worked part time at Chun Hoon to make ends meet. And when Swift closed operations in Hawaii, he followed his job to Southern California. He then moved his family to Santa Ana, California. To make ends meet, Peter worked at various supermarkets such as Lucky’s, The Pantry, Market Basket and Stater Bros. His last place of employment was Mutual Meat (a wholesale meat distributor). During his employment there, he quit briefly to work for the US Postal Service as a mail carrier. When his hours were cut, he quit and returned to Mutual Meat who hired him back with his full seniority (they never turned in his resignation papers). In his retirement years, Peter spent time watching his grandchildren up until he made the move to Las Vegas, Nevada. He and wife Gladys enjoyed playing the slots, bingo, word search and doing puzzles. He was also on a bowling league in Las Vegas for many years until age 88. In 2016, Peter had some health issues but overcame them and bounced back to his regular daily routines. Peter remained very active until the very end, driving his wife around town doing errands and of course, playing slots, bingo, word search and puzzles. It was Peter’s wishes to have a simple cremation with no service. He was loved by all that knew him. The family appreciates any photos or stories you have to share about your memories or encounters with this amazing man at the www.kraftsussman.com.