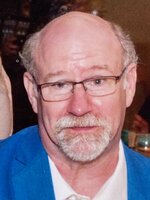 His artistic talent was apparent to his family early on, and he aced all his art courses. He progressed his career from hairstyling to salon management to earning an Emmy nomination for his work in film and television. He often volunteered in local community theatre, for which he won multiple awards.

His career was cut short with a debilitating accident in 1992 which he miraculously survived. Not deterred, he eventually opened his acclaimed tea and gift shop “Bliss” in Los Alamos, NM. There, he also served as an officer of the Benevolent and Protective Order of the Elks #2083.

He and his husband of 13 years, Timothy J. Orcutt, recently relocated to Las Vegas from Los Alamos, and prior to that from Upstate NY. He loved the Las Vegas Valley.

He is survived by his husband and sisters Pamela (Jack) Robson of Clifton Park, NY and Amy (Philip) Nolte of Saratoga Springs, NY; brothers Robert (Becky) Tinkham of Berkeley Heights, NJ and Daniel (Juliet) Tinkham of Portland, OR; and several nieces, nephews, and cousins.

He is preceded in death by his parents, Emma (Pepper) Tinkham and Wesley Edward Tinkham, both of Syracuse, NY; and beloved Maltese mix Tipper of Scotia, NY.

Friends may call from 3pm to 6pm on Tuesday, September 6 at

Funeral Mass will be held at Ten O’clock in the morning on Wednesday, September 7, 2022.

Burial will be private.