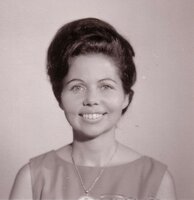 Theresa “Terry” Rounds (ne´e Derby) peacefully passed away on the 21st day of August. She was predeceased in death by her parents Norman Derby and Ena Bergstrom (ne´e Smith), her brother Richards Derby, her daughter Wendy, her grandson Jason Padilla and her husband Elbert Eugene “Gene” Rounds. She is survived by her brother John Morrow Derby, her daughters Debra (Bill) Ripley of Medford, OR, Cindy (Pete) Richards of Snellville, GA, Rebecca (Stuart) Whitehall of Macclesfield, England, Holly (Will) Eberle and Ginger (Larry) Shaffer both of Boulder City, 16 grandchildren- Amy, Rebecca (Alex) Ruiz, Brittany, Shannon, Jonathan (Lauren), Timothy (Sueann) and Steven Ripley; Brett (Sarah), Megan (Cree) Kofford, Courtney (Austin) Zohner, Zachary and Chad (Alicia) Richards; Kimberly and Jeremy Padilla; Daniel (Kelsey), Gregory (Shiori) Edmondson; and 16 great grandchildren. Theresa was born in Queens, New York City on March 23, 1933. Living in the city, she was very independent and self-reliant. At the age of ten she was sent to boarding school in Vermont and her brothers were sent to Tennessee. She loved to read and often had a flashlight under the covers after lights out. A headmaster at one of her boarding schools taught the girls about exercise and eating healthy which she adhered to her whole life. After high school, she attended the University of Arizona in Tucson and was a member of the Tri Delta Sorority. She met Gene Rounds her first year of school. They eloped in Yuma, AZ May 28, 1953. On their honeymoon they made their way east visiting family in Wisc., NY & PA. They toured DC before going to Fort Knox where Gene was stationed. Gene was sent to Japan. Terry later joined him. That was the beginning of their love of travel. They traveled the US, Great Britain, Europe, Eastern Europe and Asia & lived in Tucson & Bisbee, AZ; Rock Springs, WY; Highland, CA; Bangkok, Thailand; Denver, CO and Boulder City, NV. After Gene and Terry returned from Japan, Terry finished her degree in teaching. She loved children and taught 2nd grade and kindergarten for 19 years in Henderson, 1 year in Denver at a private school and 2 years in Thailand, 1 as an English teacher and 1 as a teacher at the International School at Bangkok. She received her Master’s Degree before she retired. Living in Thailand was a highlight of her life. She explored the country with her family- seven people packed in a VW Bug. Imagine the looks as they piled out of the car. Terry blessed her children and grandchildren with a love of traveling, exploring different cultures and seeing the sites of the world. Terry was a fun-loving person who adored her children and family. She loved her adventures and would often invite her kid’s friends to join. Being sent away to boarding school had a lasting impression on her. Family meant everything to her. She loved her grandchildren and they equally adored her. When holidays would come, they would all descend on Grandma’s house. Sleeping bags were spread out all over every square inch of the floor. They would have hours of talking, laughing and bumping elbows in her small kitchen. She spent a lot of time encouraging them to fulfill their dreams. She always had a smile on her face even as she deteriorated from the ravages of Corticobasal Degeneration/Syndrome. Services will be held on October 15 at 10:00 at St. Christopher’s Episcopal Church in Boulder City. Donations can be made in her honor at Lou Ruvo’s Brain Health Clinic-Cleveland Clinic or brainsupport.org.