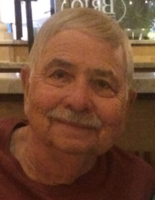 Arthur Murray Siegel, 89, Las Vegas, NV, passed away on April 1, 2022 in Las Vegas, NV. Artie was born in New York City to Louis and Mary Siegel on November 10th, 1932. In 1959, he married Beverly (nee Dubowitz) and they had two sons. He worked as a Postal Supervisor before retiring to Las Vegas in 1989. Arthur was a lifelong New York Rangers fan, had a bold sense of humor, and enjoyed spending time with his family. After the passing of his wife in 2007, he was lucky to find a loving partner and companion, Lois Dunaisky, whom he enjoyed traveling and spending time with. He was incredibly devoted to his family, dogs, and granddogs. Devoted father of Jay (Tiffany) and Brian (Sharon) Siegel. He was a loving grandfather to Mara (James) Mason and Michael Siegel, and Missy and Rachel Siegel, great grandfather to James Jr. and Matthew Mason. He was predeceased by Beverly (Dubowitz) Siegel, his wife of 48 years. Funeral service will be held at Kraft-Sussman on April 5 at 9:30am (3975 S Durango Dr Ste 104, Las Vegas, NV 89147) . Burial will follow at Bunker’s Memory Gardens Memorial Park at 11am (7251 W Lone Mountain Rd, Las Vegas, NV 89129). Family will receive friends at the home of Brian Siegel following the burial. He will be deeply missed in the Siegel’s family nest. Arthur, Artie, Art, Dad, Papa, Grandpa, and Great Grandpa, we will always carry your memory in our hearts.