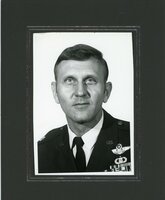 Carl Walter “Walt” Olsson December 19, 1932 – January 10, 2022 Lt. Col. U.S. Air Force Beloved husband of Linda Helene Olsson and father of Keith Alan Olsson (deceased) and Karen Olsson Bull. Carl married his best friend in 1960. He joined the Air Force after graduating from Yale in 1954. He served with distinction for 20 years as a pilot. He flew many types of aircraft, mostly the C-130 and the “Jolly Green Giant” rescue helicopter (HH3E) in Vietnam. While in the Air Force he earned an MBA which helped in his second career as Deputy Director of The Economics Institute at the University of Colorado, Boulder, CO. The Institute was for foreign graduate students seeking advanced degrees, mostly in Economics and Business. Carl taught Economics and Marketing. His passion for teaching sent him to the Ministry of Finance in Jakarta, and the business school at Yonsei University, Seoul, Korea. He often said that counseling, advising, and placing foreign students in U.S business schools were among the most satisfying experiences in his life. Carl loved classical music, singing in church choirs, reading books, golf, tennis, bridge, and kind people. Carl's marriage to Linda lasted for 62 years. He is survived by his daughter Karen (Bob) and daughters Shannon and Kiki. Keith's family includes Mindi and sons Chad (Ariel), Brett (Alexandra) and Drew (Tessa). Survivors also include Carl's brother Alfred (Al) Olsson, his wife Sue and nephew Kurt. Great grandchildren are Kaia, Brooks, Carter and Callie. God has given and taken a good and honest man. Some people enter into our lives for a short time and are forgotten. Others, like Carl, leave footprints on our hearts. The family asks that you honor Carl's memory with a gift of self or means to someone you can help. Friends and family will celebrate his life on Saturday, April 23, 2022, 10:00 a.m. at Kraft-Sussman Funeral Home, 3975 S. Durango Drive, Suite 104, Las Vegas, NV, 89147. Please join us immediately after the service for brunch hosted by Linda Olsson at Siena Golf Club Bistro, 10575 Siena Monte Avenue, Las Vegas, NV 89135.