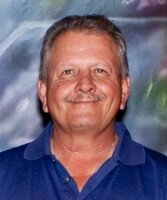 Raymond Eugene Cardona, 71, passed away unexpectedly after a short illness at St. Rose Siena Hospital in Henderson, on February 4, 2022, surrounded by his loving family. He was born in Nampa, ID on October 21, 1950, the son of Robert and Guadalupe (Cardona) Harris.

As a very young child, Ray’s family moved from Idaho to Santa Maria, CA. Ray graduated from Santa Maria High School, Class of 1968. A few years later, Ray was told by mutual friends of someone he should meet in Las Vegas. He traveled from CA where he met the love of his life, Phyllis (Render) on a blind date in November 1984. He relocated to Las Vegas, and they married in 1985. They celebrated 36 years of marriage this past December.

Ray worked as Head of Maintenance at Laborers Training School of Southern California. After moving to Las Vegas, he worked for America West Airlines, first in ticketing and then as an In-Flight Attendant. He received many Customer Service Awards during his tenure with the airline for always going above and beyond. For a short time, Ray was a delivery driver for Supreme Lobster & Seafood. Following that Ray became a Pest Control Technician. He excelled at this job because it again put him in his element of helping and serving people. He often assisted his elder customers with odd jobs and was appreciated by all. He retired in 2018. Throughout all the years, though, Ray was always happiest when he was BBQing for family and friends. His tri-tip BBQ special was the menu for many gatherings, and he loved all the hours it took to make it. He shared his ‘special’ recipe with us so he will not be forgotten every time it is made in his honor. He’ll be remembered as an amazing husband, dad, papa, and great-grandpapa.

In addition to his parents, he was predeceased by his aunt, Ruth Vega, his nephew, Bobby Cardona, and his father-in-law, Ken Render Sr.

A Celebration of Life will be held Saturday, March 26,2022, beginning at 11:00 am, at Neighborhood Church, 203 West Basic Rd, Henderson, NV 89015. Following the Celebration Service, please join the family in the parking lot of the church for a Balloon Release.

In lieu of flowers a box will be available at church for cards and donations.