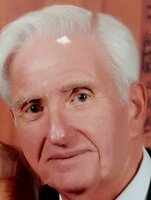 Dr. Stephen Tolman of Las Vegas, a retired dentist, died Wednesday, Feb. 9, 2022, at age 85. Born April 4, 1936, in Boston, he was a son of Frances (Baker) and Max J. Tolman. He grew up in Chelsea, Mass., graduating from Chelsea High School in 1953. He met Sharlene Joy Fein of Cleveland, whom he would marry, when they were undergraduates at Brandeis University, though ultimately both would earn their bachelor’s degrees from Northeastern University, Steve in 1958 and Sharlene in 1984. Steve and Sharlene were married in 1957 in Boston, and they started their family in Cleveland while Steve was in dental school. Steve received his D.D.S. from Western Reserve University in 1962. They lived in Middletown, Pa., while Steve was a captain in the U.S. Air Force, serving as a dentist stationed at Olmsted Air Force Base from 1963 to 1965. They lived in Chelmsford, Mass., and Ogunquit, Maine, for 30 years before retiring to Las Vegas in 1996. In 1966 Steve opened a dental practice in Billerica, Mass., that he ran until 1974. Then he had a practice in Chelmsford until he retired in 1996. He volunteered with American Dental Volunteers for Israel in 1988 and later worked in a dental clinic in Maine. He enjoyed boating, biographies, and the Boston Red Sox, as well as classical music, world travel on cruises, and Osher Lifelong Learning Institute classes at the University of Nevada, Las Vegas. In retirement he took up stained glass crafting and created windows, patio tiles and other home decorations. In 2008 Steve and Sharlene volunteered on Barack Obama’s successful presidential election campaign, lending their garage in Summerlin, Las Vegas, as a precinct headquarters for the get-out-the-vote effort. Steve’s wife died in 2017. He leaves a brother and sister-in-law, Edward and Anita Tolman of Somerset, N.J.; a son, William B. Tolman, and his wife, Bonnie Gruen, of Minneapolis; a daughter, Lynne A. Tolman, along with Richard Krasnick, of Worcester, Mass.; three grandchildren, Sarah Frances Gruen Tolman, Claire Rachel Gruen Tolman, and Simon Joseph Gruen Tolman; and nieces and nephews. Arrangements will be private. Interment will be in Veterans Memorial Cemetery in Boulder City, Nev. Memorial contributions may be made to the charity of one’s choice. Kraft-Sussman Funeral Services is handling arrangements.