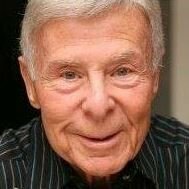 David Ira Tanner beloved father and grandfather passed away on January 18th 2022 at the age of 95, shortly after being admitted to Nathan Adelson Hospice. He had been hospitalized since November 19th 2021 due to complications of a fall. He was born in North Chicago, Illinois to Bernard Tannenbaum and Sadie L. Berger. His family moved to California in the 1930’s. He graduated from John Marshall High School in Los Angeles. During his high school years, his father changed his last name of Tannenbaum to Tanner. He had studied at UCLA. He was a WWII veteran serving in Guam for the United States Navy from 1944 to 1946 He was Honorable discharged as a Motorist Machinist’s Mate, Third Class. He began his career as a mechanic, where he used his naval training, at his job at Pep Boys in Los Angeles. He was a member of AZA and that is where he met his first wife Barbara Helen Robinson at a BBYO function. He was married to Barbara in 1950 and they were married 25 years producing two girls, Karen Elaine and Lynda Ruth. Karen passed away over 10 years ago. His father-in-law, taught him the jewelry business. He worked for Lawson Jewelers in Torrance, California, with his in-laws for over 20 years He left the jewelry business and went into the insurance business in the 1960s. He was the Charter President of the South Torrance Lions Club in Torrance, California in 1958. He continued his involvement with the Lions Club throughout his lifetime and was an active member of the Summerlin Lions Club. After reuniting in Los Angeles, California, nearly 30 years later, he married his childhood sweetheart from his Chicago neighborhood, Marilyn Freidlander, in Las Vegas, in 1979; He moved to Las Vegas in 1993 where he was an insurance broker and eventually opened his own business. Until his passing, he was still selling insurance. His hobbies were playing golf, and in his later years playing pool. He loved to dance. He lived a long and wonderful life, traveling many international places. He is survived by his daughter, Lynda and his grandson, Robby. Interment will be on March 28th 2022 at 11:20 am at the Veterans Cemetery in Boulder City. He will be buried with military honors. All are invited. A reception will follow. Location to be determined. On July 1st 2022 there will be a Celebration of his life in Las Vegas. There will be food and entertainment. All are welcomed through an invite. Please email Lynda at lyndadelgado2016@gmail.com if you would like to celebrate.