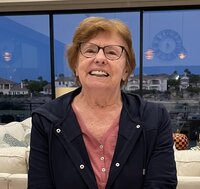 Linda Gail Stiehm of Henderson, Nevada passed away peacefully with her husband of 47 years by her side on November 9th after a brief illness. Linda was born on October 8, 1941 in Alloy, West Virginia to the late Tillman Oakey Graves and Eva Gertrude (Legg) Graves.

After attending West Virginia Tech, Linda went on to work at Montgomery National Bank. Around the mid-60's Linda left West Virginia for Torrance, California to work at Imperial Bank where she was eventually promoted to AVP Operations Officer. It was there at Imperial Bank where she met the love of her life, Edward. After a brief courtship, Linda and Ed were married on February 24, 1974.

Linda's passions included travel, and especially cherished the travels with the "Gang" to Hawaii and Europe; golf; The Denver Broncos; and her numerous daily trips to Starbucks. Linda had a great love for animals that was evident by her many furry friends over the years.

Linda is survived by her husband, Ed; brother Harry of Boomer, West Virginia and numerous nieces and nephews and her beloved cat, Mick.

A Celebration of Life is planned for next summer in Colorado.

In lieu of flowers, it is asked that if you would like, you can make donations to the Denver Dumb Friends League-an animal shelter that rescues animals and offers pet adoptions.