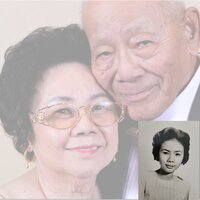 Charmidivina Dungo Cruz — mama, nana, Auntie Meng and faithful servant— passed away in her sleep October 29, 2021. She was 81 years old.

The Cruz family matriarch was devoted to our Sacred Heart of Jesus, Our Blessed Mother and the Divine Mercy – faith and family were at the core of her existence.

Charmi was born August 12, 1940, in San Rafael, Macabebe, Pampanga, Philippines. She was the eldest of five children born to Ponciano Dungo and Servillana Tubig. With a modest upbringing, she spent much of her childhood in the home of Grandma Ilang Magat, Atang Magat and Auntie Perla Dungo, who raised her like their own. From an early age, she was deeply religious in the Catholic faith and as a young woman she wanted to become a nun, but the Lord had other plans for his fruitful child.

She attended high school at Holy Angels Academy, Angels City, Philippines, then college at Centro Escolar University in Manila, where she majored in food and nutrition. She continued her education after she married, moved to the United States, and earned her Dietary Service Supervisor certification at West Valley College in Saratoga, California. She also attended Mission College in Santa Clara, California, for continued education.

Charmidivina met Tomas Quenga Cruz at Clark Air Force Base, Angels City, Philippines, and they were married on May 11, 1963. Their marriage blossomed and brought happiness with the birth of their son, Norman, and daughter, Charmie. With Tom’s military career as a pilot in the United States Army, the first few years of their marriage took them from California to Germany and back to the West Coast where they settled for decades. Family was center stage in their lives, and they sponsored many of Charmi’s siblings and relatives to immigrate from the Philippines to the U.S. Surrounded by relatives from both sides of the union, they hosted numerous family reunions, multiple prayers and feast days annually, including devotions to St. Joseph, the Divine Mercy, the Sacred Heart of Jesus, and Our Lady of Fatima.

Always the gracious host, Charmi’s language of love was food. Their family parties had rows and rows of food; the major portion prepared by her own hands. If someone showed up to her home unannounced, they had better come hungry. Had she invited a guest to their home, be prepared to eat and do not show up late. She was punctual, in fact ten minutes early was on time in her book. Charmi had an infectious laugh, an undeniable beauty inside-and-out and was generous to her loved ones. She was the nana who gave out red envelopes for Christmas, made it rain at her granddaughter’s wedding and stopped by the house to slip the grandkids a $100 bill after hitting four-of-a-kind on a video poker machine. Her generosity did not stop there. She and Tom were proud of their Filipino and Chamorro heritages and have been generous toward cultural organizations, Catholic education and religious charities.

Charmi was a dietary supervisor for eight years in a skilled nursing home in Salinas, California. She became a civil service employee in the 1980s, which led to a career with the United States Department of Veterans Affairs that spanned for more than 20 years. She and Tom spent their retirement traveling the world, enjoying time at their dual residences in Royal Oaks, California, or Las Vegas and affectionately caring for their grandchildren. In 2008, their son was recalled to active duty. Without questions asked, the couple dropped everything and moved to Las Vegas full-time to assist his family while he was away. This was not the first time the grandparents came to the rescue or helped raise one of their grandbabies. The pair had an integral part in the upbringing of all their six grandchildren, Charmi Ellaine, Tommy, Serena, Marin, Janet and Carter.

In November 2016, Charmi suffered a major stroke, but her strength and resilience kept her earthbound. During this time, her husband Tom rarely left her side until his death on Sept. 7, 2020. Now the two are together, dancing away in eternal paradise.

She is preceded in death by her parents, sister Linda Natividad and brother William “Bill” Dungo.

Charmi and her husband, Tom were proponents of Catholic education and in lieu of flowers, please consider a donation in the memory of Charmidivina D. Cruz to the Avalon School, www.avalonschools.org, or Brookewood School, www.brookewood.org.