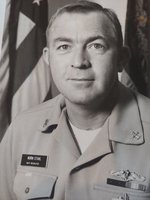 Norman Lee Stahl, 82, of Las Vegas, NV entered into eternal rest peacefully on Sunday, June 27, 2021. He was the beloved husband to Susan McGill for 25 years. He was born on December 30, 1938 in Lawrenceburg, Indiana and has resided in Indiana, Oregon, Connecticut, New Hampshire and Nevada. He was in the U.S. Navy for more than 20 years spending the majority of his career as an electrician on nuclear submarines including the U.S.S. Caiman and the U.S.S. Lafayette and ending his naval career as a navy recruiter. He was very proud to serve his country and always made it a point to thank other veterans or those in the military for their service. He then went on to work for Pratt & Whitney in Connecticut as a customer support engineer until his retirement in 1991. In his leisure time, he loved to travel, spend time with family and friends and meet people. In addition to his wife, he is also survived by his daughter, Michele Garand and son-in-law, David Garand of Las Vegas, NV and other family and very dear friends. He was a good man, a wonderful husband, father and friend. He was a happy man, always smiling – even as his dementia got worse, he smiled and enjoyed the simple pleasures of being with family, eating ice cream and going for rides in the car. He will be missed by all who knew him. Your wings were ready but our hearts were not. We are comforted that you are no longer suffering, may you rest in eternal peace my dear father. A Memorial Service will be held on Wednesday, August 25, 2021 at 11:20 a.m. at the Southern Nevada Veterans Memorial Cemetery, 1900 Veterans Memorial Drive, Boulder City, NV 89005. In lieu of flowers, memorial donations in his memory may be made to the Cleveland Clinic Lou Ruvo Center for Brain Health, 888 West Bonneville Avenue, Las Vegas, NV 89106.