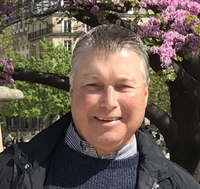 Ronald Winston Carter entered into eternal life on June 19th, 2021, in Las Vegas, Nevada, after more than a year of battling cancer. Ron was born in Bay City, MI, to Winston and Margaret Carter on Feb 28th, 1945. Before the age of 1, Ron and his parents moved back to their family’s home in Jasper County, Mo, settling in Carthage, MO, where he lived the remainder of his childhood and young adulthood. Ron graduated from Carthage High School in 1963. He attended Ozark Christian College in Joplin, Mo, where he graduated with a Bachelor of Theology in 1968 and was chosen as the class orator. On July 12, 1968, Ron married Pamela Storms of Kokomo, IN, and they remained married 52 years until his death. Ron entered the full-time pastoral ministry, serving briefly in Wichita, KS, where his son Blake was born, and Canton, OH, before moving to southern CA in 1973, where his daughter Brett was born. Ron and Pam’s spent a season of ministry in the Los Angeles, CA area and served twenty years in Napa, CA. He also served briefly as the VP of Alumni Affairs at his alma mater Ozark Christian College in Joplin, during which time he has the honor of serving as the chaplain for the KC Royals.

After their time in Napa, Ron and Pam moved to Bella Vista, AR, to pastor a church founded by Ron’s father Winston decades earlier. In 2016 Ron retired from full-time pastoral ministry and relocated to Las Vegas to be close to their daughter Brett and her family. At that time, Ron began working for Pioneer Bible Translators, where he was employed at the time of his death. Ron had a deep and abiding love for Jesus and for his bride the Church and served faithfully for over 50 years. Ron loved Disneyland and loved seeing it for the 1st time again and again through his kids and grandkid’s eyes. Also an avid sports fan, Ron loved watching golf, college hoops, college football, NASCAR racing, but more than anything, he loved his beloved Dodgers, the reigning world champs! Ron was also blessed to pursue one of his favorite hobbies: travel, visiting most of the continental US, China, Russia, Cambodia, Israel, Turkey, and all over Europe, and that doesn’t even touch all the adventures he and Pam were able to have. The biggest blessing was that Ron and Pam could pair their passion for spreading God’s love with their love for travel, serving many people worldwide with the deepest of human and spiritual needs. Ron is survived by his wife of 52 years, Pam, his son Blake Carter, daughter-in-law Heather, grandson Bennett and granddaughter Emma, of Springfield IL, and grandson Berkeley Carter of Pasadena, CA. Additionally, he is survived by his daughter Brett Detken, son-in-law Patrick, grandson Jackson, and granddaughter Mia, all of Las Vegas. Ron will be buried in Carthage, MO beside his parents and grandparents.  His life will be celebrated on July 9, 2021, at New Life Church, Bella Vista, AR at 2:00 pm and again at Hope Church in Las Vegas on July 23, 2021, at 12:30 pm.