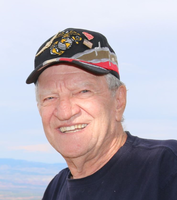 Wyatt Monroe Huddleston, age 84, formerly of New Jersey and a nearly 20-year resident of Las Vegas, NV, was promoted to heaven Tuesday, June 15, 2021. Wyatt was born on December 30, 1936 in New Jersey. He is the son of the late Julius Allen and the late Helen Elizabeth (Craig) Huddleston. He met and married the love of his life, Dolly in 1958. He honorably served his country in the USMC flying helicopters during the Vietnam war. He was employed as a pilot for Eastern Airlines for over 20 years. His is preceded in death by his son, Wyatt A, his brother, Craig and sister, Helen. He is survived by his wife: Dolly Huddleston; a daughter Colleen (Brian) Campbell and sister, Carol Flynn. As his family receives messages of sorrow, they are being reminded of how he positively influenced so many people in his 84 years. He so very much enjoyed outdoor life so please honor him by looking to the sky and being in awe of the never-ending universe. Enjoy all that nature has to offer with its vast beauty. A memorial service with military honors is scheduled on Wednesday, June 30, 2021 at 1pm at Kraft-Sussman Funeral and Cremation Services, 3975 S. Durango Drive, Suite 104, Las Vegas, NV 89147. In lieu of flowers, the family asks for donations be made to City of Hope (www.cityofhope.org).