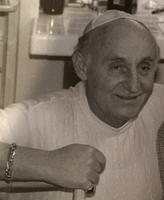 Bernard Graf, 89, died unexpectedly on March 21, 2021. Bernard was his birth name, but he was known as Bernie to most, Saba Bernie, and Dad to those who loved him. He was born in Berlin, Germany in 1931. When Bernie was only 3 years old, the dire situation in Germany caused his family to leave their home with the lights on, to escape to what was then known as Palestine for a better life. At the age of 13, Bernie became one of the founding members of the underground military organization known as the Haganah. This Jewish resistance movement helped lead the formation of the State of Israel. In the early 1950's, Bernie joined the Merchant Marines where he had the opportunity to travel the world. Soon after, Bernie decided to move his young family to New York to start his life in the United States. In the early 1960's, they moved and settled in the San Fernando Valley of Los Angeles. He owned and operated the Army/Navy Surplus Headquarters, from 1971 through 2014. The store became a staple not only in Reseda, but throughout the valley. On a terrible night in 1993, after locking up the store, he and his wife Lea (of 39 years) were victims of a horrific robbery; Bernie fought back, but unfortunately his wife did not survive. Bernie had always dreamed of moving to Las Vegas, and finally in 2014, he was able to make that dream happen with his wife Cecilia. Bernie had a zest for travel, a passion for watching soccer, and a love for ballroom dancing, all which contributed to his healthy lifestyle. Bernie is survived by his wife Cecilia (of 8 years) and his daughters, Tami Kochlani and her husband Avi, of Tarzana, California, and Karen Graf Collins, and her husband Bill of Las Vegas, Nevada. He is also survived by 6 grandchildren, and 10 great grandchildren.