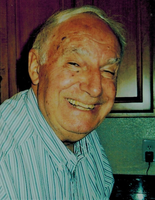 Carmine Antonio DiBernardo, 88 years old, died Friday, January 1, 2021 at his home in Las Vegas, Nevada. He died peacefully in his sleep with his wife, daughter and son by his side. Born on March 10, 1932 in Ischia, Italy, he was the son of the late Antonio DiBernardo and Giovanna Grimaldi DiBernardo. Carmine married Giovanna Artiano on January 19, 1963 in San Pedro, CA. He graduated from San Pedro High School in 1951, then entered the United States Navy. He served during the Korean War aboard the USS Bonhomme Richard as a radio operator. He was honorably discharged in 1955. Carmine spent his career in the food industry, working at several grocery stores. He was one of the original owners of Busy Bee Market in San Pedro. He loved to travel, watch sports, go to the horse races and spend time with his family. One of his passions was his love for biplanes, so without telling his parents, he took flying lessons and obtained his pilot's license. He loved flying over Catalina Island. He was a great storyteller and always offered many pearls of wisdom. One sibling preceded his death, Carolyn Weeks. Surviving siblings include Anthony DiBernardo and Nancy Donato. Carmine is survived by the love of his life, Giovanna, his sons Anthony, John and Jerry, two daughters, Joann and Lisa, and fourteen grandchildren, John, Nicholas, Alyssa, Amanda, Andy, Michael, Neiko, Alec, Gianna, Tony, Vito, Pete, Luke and Matthew. He is also survived by his beloved Zia Filomena, many nieces, nephews, cousins and friends. Carmine was a man of faith and had a strong love for God. In lieu of flowers, the family suggests a donation be made to the St. Jude Children's Research Hospital at www.stjude.org or to the Cerebral Palsy Foundation at www.cerebralpalsyfoundation.org. The funeral will be a private gathering. The family sends its heartfelt gratitude for the outpouring of love and support.