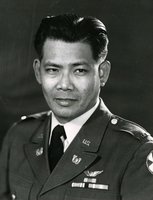 Tomas Quenga Cruz, 94, was born December 22, 1925, in Piti, Guam, to Jose Cruz Santos and Marcela Quenga Cruz. A man with nine lives, he successfully survived being shot, bayoneted, six crash-landings and colon cancer.  Our beloved husband, father, papa, great-grandpa, uncle and brother passed away peacefully surrounded by his family and loved ones on September 7, 2020.

The second of nine children, he was a free-spirited, mischievous child, and while he kept his parents on their toes, he was quite the mama’s boy. Tom was 15-years-old when the island of Guam was invaded by the Japanese in 1941. Along with his father and eldest brother, John, he was forced to work in labor camps until the island was liberated in 1944. The Cruz family had many businesses — from market stores to Guam’s first car dealership and taxi cab company — and as a young man, he joined the family team as a taxi driver. He continued his work until he was steered toward a college education on the U.S. mainland. His college education was cut short when he was drafted into the Army.

Tom’s military career began in 1946 at Fort Lewis, Washington, where he completed basic training. He then served with the 72nd MP Battalion in Tokyo, Japan, until 1948. While serving a two-year reserve duty obligation with the 375th Military Police Company in Pasadena, California, he attended a civilian pilots school for eight months and earned a fixed-wing commercial license. While still attached to the 375th, he was recalled for active duty, and after five months at Camp Cooke he went to Korea in March, 1951, with the 40th Infantry Division. Afterwards, he was assigned to the 701st MP Company at Fort MacArthur in California.  A year later he was with the 759th MP Battalion in Berlin, Germany. In 1954, he was accepted to the U.S. Army Helicopter School at Fort Sill, Oklahoma, and earned his wings that October. He was the first Guamanian helicopter pilot in all U.S. military forces. In 1955, he was assigned to the 3rd Helicopter Company at Fort Belvoir, Virginia, supporting the White House and Pentagon. He occasionally flew then-Vice President Richard Nixon to and from Camp David. In 1958, Tom was assigned to the 13th Helicopter Transportation Company in Korea. He served two tours in Vietnam, 1962-1963 with the 33rd Helicopter Company and 1967-1968 with the 15th Transportation Company.  By the time he retired in 1971, he had logged more than 6,000 hours and reached the rank of Chief Warrant Officer. CWO-4 Cruz was awarded the Bronze Star Medal, the Air Medal with six oak-leaf clusters and the Army Commendation Medal.

Following his military career, he became a supervisor at Lockheed Missiles and Space Company before retiring for good.  As a gentleman farmer, Tom experimented with raising pigs and harvesting balut eggs, trading in his collared shirt for a shovel on the weekends.

A twice-divorced man, he met the love of his life, Charmidivina Dungo, at Clark Air Force Base in the Philippines while passing through on an air mission. Determined to win this angel’s heart, he put in the effort of a traditional courtship by writing her letters for months, agreed to supervised dates and renewed his good standing in the Catholic faith. They married on May 11, 1963, and have been inseparable ever since — more than 57 years. The pair always put faith and family first and led by example by loving the Lord. With dual residences in Monterey, California, and Las Vegas, Nevada, their number of friends is boundless. They enjoyed entertaining and their “small” parties were often 100 people deep. They hosted or supported multiple prayers and feast days annually, including devotions to St. Joseph, the Divine Mercy, the Sacred Heart of Jesus and Our Lady of Fatima. The two loved to travel, literally danced their way through life and could cut a rug —  jitterbug style — well into their senior years. In their later years, they devoted their time and energy to their six grandchildren (Charmi Ellaine, Tommy, Serena, Marin, Janet and Carter), raised them like their own and doted on them in typical grandparent fashion. Proud of their Chamorro and Filipino heritages, they have been very generous towards cultural organizations, catholic education and religious charities. They have deep roots in the local Guamanian community and in 2018 Tom was honored as the Grand Marshal of the 74th Guam Liberation Day celebration in Las Vegas.  Since his wife, Charmi, became homebound after suffering a major stroke four years ago, Tom rarely left her side.

Tom will be remembered as a hard-working man who toiled the land and had an extraordinary green-thumb. He could grow lush, plentiful, fruit-bearing trees from a small shoot. During his prime, throwing a 200-pound pig onto his back was no big task. While he didn’t mind getting his hands dirty, he was meticulous in the way he dressed and organized his garage — everything had its place and had to be just right. He loved to play tennis and was always up for a jaunt to the casino for a hand of blackjack. Friends have described him as an old-school classic, just like his Mercedes and Members Only jacket. He was very passionate, gave unconditional love and advised younger generations of men to never leave a woman without a smile. At times, his cheeky attitude would be on full display when he joked, “I’m Tom Cruz, the original and good-looking one.”

Tom and Charmi were proponents for Catholic education and in lieu of flowers, please consider a donation in the memory of Tomas Q. Cruz to the Avalon School, https://www.avalonschools.org/donate.html, or Brookewood School, www.brookewood.org.