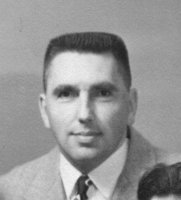 Arthur Wright Latta, age 87, of Las Vegas passed away April, 28, 2009. Arthur was born October 5, 1921 in Turkey River, Iowa. He is the son of the late Arthur Wright and the late Elnora (Becker) Latta. He is survived by his loving wife of 67 years, Iva; his daughter, Jacque Lady of Arroyo Grande, CA. his son, Rocky (Emilie) Latta, of Anchorage, AK ; five grandchildren and six great-grandchildren. He is predeceased by one great grandchild. Arthur retired from the United States Marine Corps after 23 years of service which encompassed World War II and the Korean Conflict. While in the USMC, Arthur earned numbers awards including the Navy Unit Commendation, American Campaign Medal, Atlantic-Pacific Campaign, WWII Victory, Army/Navy Occupation Service, China Service Medal, National Defense, Korean Service, United Nations Ribbon and Korean POC. As part of his military career, Arthur worked with young men and women through his involvement with the Jr. ROTC at Shawnee Mission in Kansas and NROTC at Iowa State University. After his military service, Arthur served as the Director of the State of Nevada Department of Motor Vehicles. In addition, he and his wife, Iva, owned and operated a Laundromat and motel for many years in Reno, NV. Arthur was a life member of the U.S.S. Philippine Sea, the Retired Officers Association and the Navy League. He was a physical fitness enthusiast and an avid handball player, earning numerous trophies throughout the years. Arthur was a volunteer for the YMCA, serving in their Board of Directors. He and his wife, Iva, are supporters of a number of wildlife and animal causes. The funeral service and burial will be held on Friday, May 1, 2009 at noon at Southern Nevada Veterans Memorial Cemetery,1900 Buchanan Blvd., Boulder City, NV, 89005. Funeral arrangements were made by Kraft-Sussman Funeral Services. Donations in Arthur's honor should be made to a charity of the donor's choice. . .