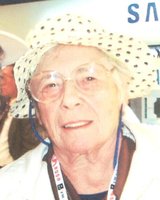 Julia Lichtenstein, age 86, of Las Vegas, passed away Thursday, March 1, 2012. Julia was born April 26, 1925 in New York, NY to the late David and the late Mildred (Weintraub) Kasell. Julia earned a bachelor's degree from Brooklyn College in physical therapy. While there, she was also a championship fencer. She met her late husband, Charles while crossing swords at the fencing club. Julia had a career as a physical therapist at Children's Hospital in Chicago. She is survived by her children David (Jeanne) Lichtenstein and Helen (Mark) Schussler; and grandchildren Joshua and Alyssa Lichtenstein and Joshua Schussler. She is predeceased by her husband, Charles Lichtenstein and her sister, Esther Cohen. A service will be held 2:00 pm on Thursday, March 8, 2012 at Southern Nevada Veterans Memorial Cemetery, in Boulder City, NV. .