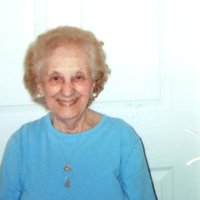 Rosalinda Salzillo, age 95, of Las Vegas, passed away Thursday, February 23, 2012. Rosalinda was born August 6, 1916 in New York, NY to the late Enrico and the late Carona (Robustelli) Capponi. Rosalinda lived 88 of her years in New York, prior to moving to Las Vegas seven years ago. As a stay at home mother most of her adult life, she was actively involved in and served as president of the St. Anne's Guild and her children's PTA, and was an active volunteer in the Immaculate Conception Church. She was also a founding member of the Ellis Island Foundation. Rosalinda also worked as a Bus Matron for children with special needs in the New York City school system. She is survived by her children Victoria Caserta of Henderson, NV and Joseph Anthony Salzillo of Manhattan Beach, CA; grandchildren Lisa, Laura, Lynn, Lauren and Thomas; great grandchildren Taylor, Gabriella, Frank and Marco; sister Emma Cerillo and brother Al Capponi. She is predeceased by her husband of 45 years, Gaetano Salzillo. Calling hours will be Saturday, February 25 from 4:00PM-5:00PM at Kraft-Sussman Funeral Services, 3975 S. Durango Drive, Suite 104, Las Vegas, NV. The funeral will be held immediately following at 5:00 pm on Saturday, February 25, 2012. A funeral mass will be held in the Ferncliff Cemetery Chapel, Hartsdale NY on Saturday, March 3 at 11:00 am, with interment immediately following.