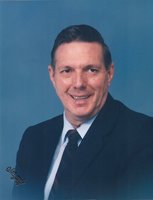 Loving Husband, Father, and Grandfather, Jackie Lee Bergner of North Las Vegas passed on July 30, 2011. He began his life in Hammond, Indiana on February 19, 1937. On November 18, 1955 he married his wife of fifty-five years, Audrey K. Walker. He Managed a National Tea food store for eighteen years. He then Worked for Northern Indiana Public Service as an Electrician for twenty-six years. Jackie Bergner was also quite dedicated to his community. In Merrillville, Indiana, he was a devoted volunteer fireman for seventeen years. He also volunteered for 4H for fifteen years in La Porte, Indiana. He carried his affection for giving back with him to North Las Vegas, where he committed himself to Canyon Ridge Christian Church as a Greeter. Jackie Bergner was preceded in death by his Grandson LCpl. Adam Wade Kaiser. He is survived by his Wife, Audrey Bergner, his Children, Christine Kaiser, Jackie Bergner Jr., and Kimberly Johnson, and his Grandchildren, Sarah Frazier, Amanda Kaiser, Jesse Bergner, Brianne Johnson, Daniel Johnson and Todd Johnson. A memorial service will be held at Canyon Ridge Christian Church. The date and time for this service will be announced at a later date. &quot;They are not dead who live in the hearts they leave behind&quot; - Tuscarora