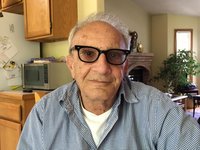 David Ravona of Las Vegas, Nevada, passed away on Saturday, June 13, 2020. He was 75 years old. David was born in Spain in 1944 to Joya and Roberto Ravona and was one of 5 brothers, including a twin. The family settled in Israel in 1948, where Mr. Ravona served as a decorated officer in the Israeli Defense forces, fighting heroically during the Six Day War, Yom Kippur War and invasion of Lebanon. David married Miki Ravona and together, they raised their children Joy and Simon in Los Angeles California, where David worked in plumbing, HVAC and other handyman type positions. He was an avid painter and sculptor - a true talent. His sense of humor, warmth, and creativity made him an adored husband, brother and uncle. He was a beloved grandfather to Asher, Golda and Ezra. The funeral for David will be held at Bunkers Memory Garden Cemetery on June 15th, 2020.