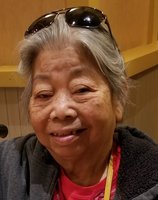 Eusebia Padilla Callanta, age 79, of Las Vegas, died Thursday, August 1, 2019. Eusebia was born April 4, 1940 in San Nicolas, Pangasinan in the Philippines. She enjoyed cooking for her family and knitting hats and clothing for her grandchildren. Throughout her life, she lived in the Philippines, Guam, Washington state and Las Vegas. She was a devout Christian. She enjoyed drawing, playing games on her phone, and playing with her grandkids. She is survived by her three children Bernardo (Prescilla) Padilla Callanta, Evangeline (Ron) Callanta Vasquez, and Maricar (Jeffrey) Callanta Credo; her six grandchildren, Bercel, Nieres, Nina Ricci, Bailey, Rainelle Mikaella, and Jeffrey Jr.; her sister Maxima Layco; her brother, Herminigildo (Remegia) Padilla; her sister-in-law, Marcelina Padilla; and many nieces, nephews, and loving friends.She is preceded in death by her late husband, Felomino Callanta; her parents, Cipriano and Mauricia (Serquina) Padilla; her siblings, Fausto Padilla, Saturnina Gacusan; her brothers-in-law, Laureano Gacusan, and Marcelino Layco. A Visitation will be held on Tuesday, August 6, 2019 from 11am to 4pm, where a Funeral Service will be held at 2pm at Kraft-Sussman Funeral and Cremation Services, 3975 S. Durango Drive, Ste. 104, Las Vegas, NV 89147. She will be greatly missed by numerous friends and family from the Philippines, Guam, and all over the United States.