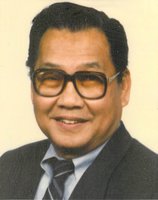 Jose Lirag Serapio Jr known as Peping, was born on March 19, 1927 to Judge Jose Serapio and Consolacion Lirag in Obando, Bulacan, Philippines. He left this world on May 28, 2019 in Las Vegas, Nevada. He was 92 years young. After the World War II at the age of 17, he worked at the War Damage Commission in the Philippines. Peping then graduated from Far Eastern University with dual degrees in Accounting and Law. From there, he worked at the Central Bank of the Philippines as Assistant Director in the Loans and Credit Department. He was later promoted as the Director of the Revenue Collections Office until he retired. Peping was a devout Catholic and attended Santo Domingo Church in Quezon City every year in October, during the feast day of Our Lady of the Rosary of La Naval to pay homage to the Virgin Mary. He had the honor of being one of the members to hold the "Karro" during the yearly procession of Our Lady of the Rosary. Peping is survived by his wife Maureen, former wife Emma; his Children Carmina (Babylane), Rodelio and his wife Ellen, Michael Marcel, JR and his wife Joyce; his Grandchildren Katrina and her husband Rico, Francis and his wife Nunie, Franco, Analyn; his Great Grandchildren Annika, Martina, Lucas, Olivia and Vivienne. Peping was preceded in death by his Children Arnel and Arminda. Peping had a charming personality and brought smiles to those who he met. He was always there to help a friend in need. Some of his favorite past times were Golf, Blackjack and MahJong. He loved to travel and visit Historic Landmarks. Peping was a wealth of knowledge when it came to these historic landmarks.Thank you to everyone that graciously offered condolences and were lucky enough to spend time with Peping. He will truly be missed. Memorial services will be held at Santo Domingo Church, in the St. Martin DePores Chapel on Thursday, June 7th from 2-7PM Philippine Time and also on Friday, June 8th from 2-7PM Philippine Time. A Mass will be held at 7PM Philippine Time following each service. A final Mass will be held in Jose's honor at Santo Domingo Church on Saturday, June 9th at 9AM Philippine Time, followed a procession for internment at the Serapio Mausoleum, located in the Polo Catholic Cemetery,Valenzuela, Metro Manila, Philippines. The address for Santo Domingo Church is 537 Quezon Avenue, Quezon City, Philippines.